Sharing Her Dream with Homeless Teens 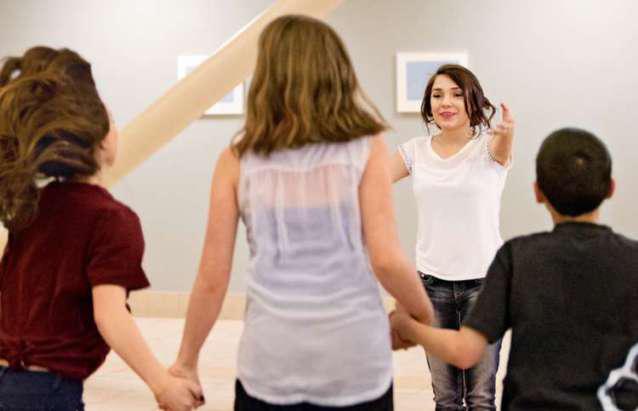 At six o' clock sharp the curtain rises. Two hundred audience members, including the mayor of Reno, Nevada, look to the stage. Dozens of talented, elaborately costumed actors break out into the first number of The Lion King.

But this is not your typical production. The gifted cast is made up of homeless children living at the Volunteers of America family shelter in Reno. Children who've been given a chance to escape their problems and live their dreams onstage, thanks to volunteer acting coach Nasya Mancini.

"I see so much of myself in these kids," says Nasya. "I tell them their current circumstance doesn't have to be their destiny. If they are determined they can do anything they want."

Determination is something Nasya knows all about. She and a twin sister were born prematurely. Her sister died shortly after birth, and Nasya—who weighed one pound, four ounces—was given little chance of survival. But Nasya kept fighting.

She had open-heart surgery at two weeks old. Doctors predicted she'd be in the hospital for five months. She came home in nine weeks. Her very name (pronounced "Nah- SY-ah") means "miracle" in Hebrew.

Nasya was small, but quickly proved that her talents were as big as her will to survive. She started dancing at two. By six she'd been spotted by an acting coach, who encouraged her parents to enroll her in drama classes. "There was something about being onstage," Nasya says. "It made my spirit come alive."

Her enthusiasm didn't sit well with some of her schoolmates. In first grade, Nasya was in the hallway telling friends about her classes. "I'm going to be an actor. One day I'm going to be a star."

Some sixth graders overheard. "You? You're a shrimp. You're not even pretty. No one will ever know who you are."

Nasya came home in tears. "Mom hugged me and said, 'Don't listen to them! You can be whatever you want to be. Stand up for yourself.' But I couldn't. What if they were right?"

Nasya kept being bullied for her passion for acting. "I tried to ignore it," she says. "Because every time I got up onstage and delivered a performance, it gave me a boost of confidence and encouragement. Like I was doing what I was meant to do."

One day, in fifth grade, Nasya was in music class, playing her recorder. "One of the popular girls told me, 'I can play better than you. And if you're not better than me, then how can you be an actor? Give. It. Up.'"

This time Nasya kept her cool. She replied, "I love to act. I'm going to make it. And I don't really care what you or anyone else thinks of me."

When her mother asked if she'd been bullied that day, Nasya said, "Yes, but today was the day I stood up for myself." By high school, Nasya was winning awards in theater competitions. As a sophomore, she entered the Miss Northern Counties Outstanding Teen pageant and needed to choose a community-service platform.

Her acting coach mentioned that she taught drama to children at the Volunteers of America shelter...and that there were more than 300 people living there, all from the Reno area.

Nasya was stunned. "I was so blessed that I didn't realize how blessed I was!" she says. "I'm healthy, have wonderful parents, a great home. I couldn't believe how many homeless children there were right in my own backyard."

Nasya knew she'd found her cause: She would work with her acting coach to teach drama to the children at the shelter. "The first day, we played icebreaker games to get to know each other. Then we practiced improvised dialogue. My goal was to take their minds off their problems. Some of the kids were really talented and funny—I was blown away!"

At the end of the class, a little girl asked where she was going.

"Can I go with you? People tease me because I don't have a place to live."

Hearing that broke Nasya's heart, reminding her of the bullying she'd endured growing up. She gave the little girl a hug and said, "You tell them you might not have a place to live but you have a home here with me. And you can do whatever you want in life."

Nasya wanted the kids at the shelter to discover the confidence and empowerment that acting could give. The best way to do that, she decided, was to put on a big play. It would be a combination of the kids' favorite Disney movies: The Lion King, The Little Mermaidand Aladdin.

She contacted a drama company that she'd performed for, TheatreWorks of Northern Nevada, and it offered to help with costumes, tickets and programs.

"I got the word out to everyone I could, but I still couldn't believe it when I heard the mayor was coming," she says. The production was a hit. The kids took several curtain calls. Donations to the shelter rolled in.

Long after Nasya won the title of Miss Northern Counties Outstanding Teen, she has stayed committed to the kids at the Volunteers of America shelter. For the last three years she's been teaching weekly drama classes there. She's helped the kids put on big productions like Peter Pan and Wishes, a Magical Gathering of Disney Dreams.

At each class she reminds the kids of something she knows with every part of her spirit to be true: "Believe in yourself. The world is your stage."