Helping Make the Dream of Becoming a Nurse a Reality

In the midst of changing career paths, Christine lost her job and her car. Would she also have to sacrifice her dream of doing something that mattered? 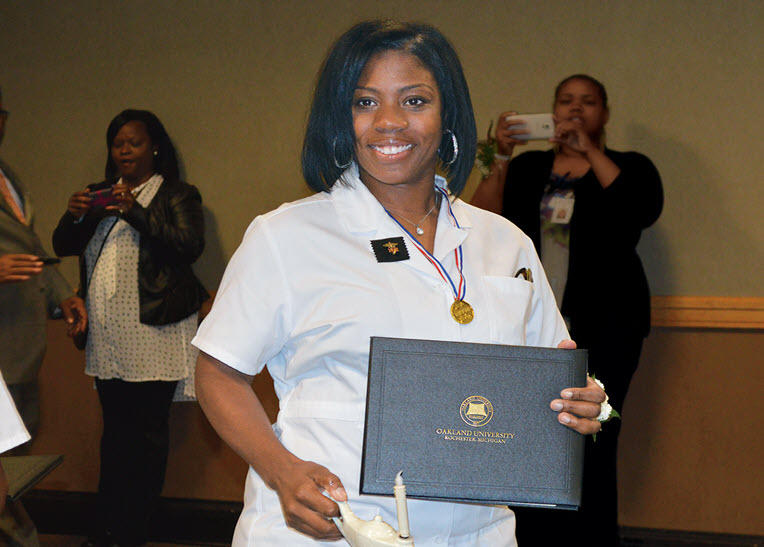 Christine Rowsey didn’t know how she would go on. The last three years had been hard, some of the hardest in her life, but she’d at least felt as if she was making progress toward her goal of becoming a nurse. She was working full-time to support her 5-year-old son, Bryson, all while taking prerequisite science courses at a community college in the evenings. Then she was laid off from her job as a financial risk analyst and, perhaps most devastating for a native Detroiter, her car was repossessed.

That dream came out of the tragic loss of her infant son, Christian, three years before. Christine had been only six months pregnant when she was rushed to the ER with what turned out to be an inflamed gallbladder. Her baby had to be delivered premature.

Christine recovered, but her son was another story. She spent the next seven months in the neonatal intensive care unit with him, as he underwent more than a dozen operations that, in the end, couldn’t save him.

Christine’s main source of support during that ordeal had been the hospital’s nursing staff. “I really loved the way they helped me throughout that time, when there were so many unknowns,” she said.

That’s when Christine had a realization: She didn’t want to be a risk analyst any longer.

“I wanted to do something with my life that mattered,” she said.

Christine became determined to become a nurse and help people the way she had been helped.

Now despite all her efforts, her work toward that dream had come to a halt, just as she was ready to start nursing courses. How could she continue without a car? It was then that she discovered the Volunteers of America Michigan’s “Cars Helping People” lot in Pontiac, where donated vehicles are available at fair prices for those in need, and she worked out a reasonable payment plan. There was no way she would have been able to take her classes without her own car. The Volunteers of America program made it all possible.

She was able to enroll in Oakland University’s one-year licensed practical nursing (LPN) program. She took out loans and worried about how she would repay them. She became her class’s star student but struggled to take care of Bryson and study at the same time, and the bills would have to be paid eventually. “I had the vision, but I wasn’t quite sure how I was going to get it all done,” Christine said. With scholarships, she was able to cover about half of her costs. For the rest, she just had to have faith that “somehow God would provide.”

That’s when Christine found out about another Volunteers of America Michigan program, the Health Profession Opportunity Grants. She applied and was accepted. The program not only paid for her tuition but offered her a stipend to cover gas and food for Bryson—it even covered fees for her tests.

Christine was also able to link up with Rene DeLoach, a health profession employment specialist for Volunteers of America, who guided her and gave her support while she completed her coursework, earned her license and applied for jobs.

“The Volunteers of America program was a real blessing. I was at the end of my rope before I found it,” Christine said.

“I wouldn’t have been able to continue going to class if Volunteers of America hadn’t been there for me.”

Christine now works as an LPN at Riverview Health in Detroit, where she cares for patients on the ventilator floor. She’s already taking classes toward her RN certificate. Through Volunteers of America, she gives talks to young people about the nursing profession.

“Nursing school was the hardest thing I’ve ever done, and Volunteers of America helped me through it,” Christine said. “They helped me rewrite my life, the way I wanted it to be written.”