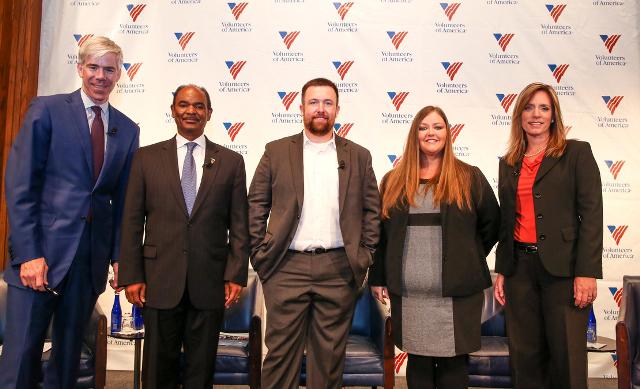 On May 12, Volunteers of America hosted The Wages of Valor: Economic and Employment Challenges Facing America’s Veterans, a panel discussion at the National Press Club in Washington, D.C. that focused on the often harsh economic realities veterans face after returning home. Panelists shared their thoughts on the issues, strategies and solutions illuminated by new research released during the event, including job training and employment, affordable housing, and the physical and mental barriers to self sufficiency.

Moderated by David Gregory, panelists include Debbie McKinley, U.S. Marine Corps reservist and senior director of human resources with The Home Depot; Col. Robert Gordon (ret.), President of Be the Change, Inc. and a U.S. Army veteran; Sara Kintzle, Ph.D., LMSW, a research assistant professor with the Center for Innovation and Research on Veterans and Military Families at the University of Southern California; and Jim Zenner, director of Volunteers of America Los Angeles’ Hollywood Veterans Center and a U.S. Army veteran.

During the event, Volunteers of America released a new study titled “Exploring the Economic & Employment Challenges Facing U.S. Veterans,” prepared in partnership with the Center for Innovation and Research on Veterans and Military Families at USC’s School of Social Work. The report explores why so many of the veterans who do find employment cannot keep their jobs, and why so many others cannot find satisfactory employment. The study points out that veterans need help transitioning from military to civilian life, identifying comparable job skills and retraining. Employers also need to understand the challenges veterans face and the fact that it isn’t enough just to provide vets a job. The full report can be found online at www.voa.org/vets-study.

Last year alone, Volunteers of America helped more than 40,000 homeless veterans across the U.S. We are one of the largest national providers of housing and programs for homeless veterans and their families. Responding in particular to the challenges facing veterans returning from Afghanistan and Iraq, many of whom suffer from traumatic brain injury (TBI) and post-traumatic stress disorder (PTSD), as well as those who served in prior conflicts, Volunteers of America is assisting with a variety of needs, from housing to counseling to job training and assistance with employment. We have veterans programs around the country, including special housing, services and programs for returning veterans as well as aging vets. Programs for women veterans are also helping single mothers and other female veterans who are finding it difficult to transition back into civilian life.

May 12, 2015 - The Wages of Valor: Economic and Employment Challenges Facing America's Veterans