Give today Give monthly
17

"We Just Didn't Know What to Do"

“We just didn’t know what to do,” said 93-year-old survivor, Cal Hanson. “The water was rising and rising. Our only option was to retreat to the second floor where we’ve been ever since.” 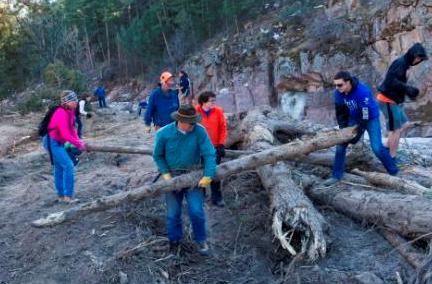 Volunteers of America was immediately responsible for manning shelters and donation centers with eager Retired Senior Volunteer Program (RSVP) volunteers. In addition, the organization has been mobilizing volunteers in cleanup projects since the flood. Throughout flood recovery, Volunteers of America has had a chance to work with many grateful survivors. Hanson and his wife live in the Cedar Cove area of the Big Thompson Canyon, and the floodwater had overcome the first level of the Hansons’ home.

Weeks later after the water subsided, a mold-infested and unlivable home remained behind. Hanson and his wife, 92, were forced to walk up and down their steps every time they left their second story abode. After hearing their story, Volunteers of America matched the Hansons with a group of Lutheran volunteers from Kansas City and started to plan a project. The skilled volunteers descended on the Hansons’ home for four days, bringing with them sheets of drywall, three drywall lifts, and all the necessary tools to install sheetrock. The Hansons couldn’t be more grateful. Although the road to flood recovery is long and hard, it is encounters with folks like the Hansons that make it all worthwhile.

Emergency services are just one way Volunteers of America is helping the most vulnerable.

Next Chapter A Good Neighbor Inspired by God's Love