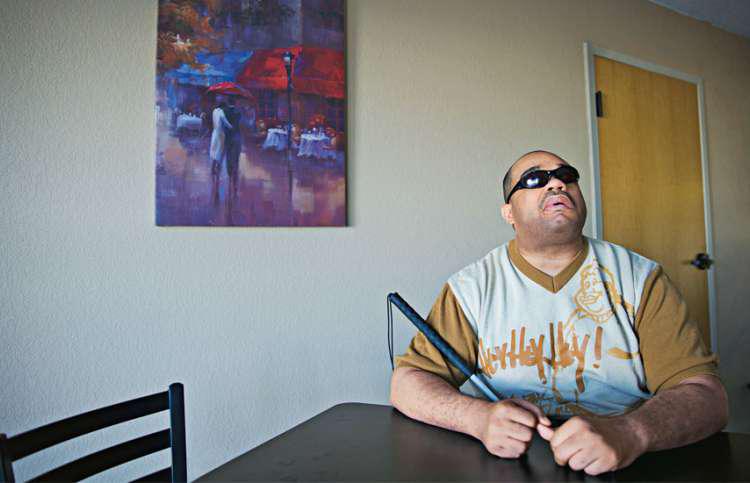 He'd always lived life to the fullest. He was Mr. Popular at school. The star of his middle school basketball team, with dreams of going pro. At 13, though, Willie Wilson's life changed. The chalkboards in class got blurry. He couldn't read books without squinting. Soon he barely recognized his schoolmates in the halls.

His parents took him to the eye doctor. Willie could still slam-dunk like no one else, so they assumed there was nothing serious to worry about. Maybe he just needed glasses. But the doctor discovered that Willie's vision was 20/200. Nobody could explain his sudden vision loss. And it kept getting worse. By 15, he was completely blind.

Willie didn't handle the situation very well. He ran the streets with his friends. Came home drunk. Picked fights at school with anyone who dared to make fun of his blindness.

"I was trying to show everyone that there was nothing wrong with me," he says. "To prove that I was still the same 'Thrill Will Wilson.'" He was in denial.

That denial was blown away one Sunday when Willie heard a sermon about salvation on TV. At 18, he gave his life to the Lord and read the Bible in Braille, finding comfort in God's special love for those who are weak. He became a licensed minister and went off to college a changed man.

His progress was stymied, though. He started to lose his hearing in the same way he had lost his eyesight. By 21, he was blind and deaf. He dropped out of school and moved back home with his parents. This time, the doctors were able to pinpoint the cause of his symptoms—a brain tumor.

Willie's world became a blur of doctors' appointments, hospitals and surgeries. His spare time was spent brooding in his childhood bedroom. His friends disappeared. He challenged himself to learn American Sign Language so he could communicate with others by feeling their hands.

His parents and relatives found signing difficult, though. Instead, they drew letters into his hand. Willie grew frustrated by the lack of meaningful conversation.

His grandfather Willie Wilson, Sr., encouraged him not to lose hope. "You can't see or hear as well as others," he told Willie, "but you can do anything you set your mind to."

Right, thought Willie. I can't even fold my own laundry or make myself a sandwich. "I just stayed in my bed," he recalls. His faith in his dreams was fading, the way his sight and hearing had.

Until one day, someone told Willie about Spruce Manor, an apartment community in Jacksonville, Illinois, specifically designed for individuals with disabilities. It was run by Volunteers of America of Illinois. Willie could live in his own place while getting the support and training he needed.

It seemed too good to be true. Willie got an application, which his rehabilitation counselor helped him fill out. And before turning it in, Willie prayed.

Willie was accepted into the program the following year. In 2013, at the age of 37, he moved into one of the 15 apartments at Spruce Manor. He finally found what he'd been so desperate to regain—his independence.

These days, Willie is Mr. Popular once again. His signing is improving and he often cracks up the staff and other residents with his sharp sense of humor.

A special pager on his belt lets him know when the doorbell rings or an emergency alarm goes off. He cooks meals and does his own laundry. He even participates in Spruce Manor's competitive Wii bowling league. Someday soon, Willie hopes to complete his college education. In the meantime, he's enjoying his new home and family.

"God truly has guided me here," Willie says. "I'm able to take care of my own business. I'm living life my own way now—Willie style!"

Chicago native Willie Wilson was once Mr. Popular at school; a good athlete with an outgoing personality, he had big dreams. But suddenly, he began losing his eyesight and eventually his hearing too. His dreams faded and his sense of purpose left him.

But as detailed in Diana Aydin's profile in the April 2016 issue of Guideposts, Spruce Manor, an apartment community designed for individuals with disabilities and operated by Volunteers of America, returned to Willie the independence he feared he'd never again experience.