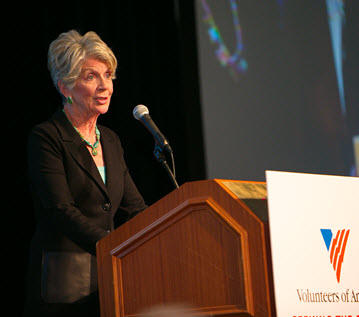 Lamm served as the first board president of The Women’s Foundation of Colorado. As Colorado’s First Lady (1975-87) she initiated and chaired the Governor’s Task Force on Children and was a member of the Governor’s Commission on Women. Lamm currently serves on the Foundation Board of the Rocky Mountain Farmers’ Union and the Capital Campaign Committee for Planned Parenthood of the Rocky Mountains.

“Dottie Lamm is passionate about the needs of America’s women and children and ensuring they receive the attention they deserve,” Volunteers of America National President Mike King said. “Through her advocacy work, she is making a real difference in the lives of women by making sure that their voices are heard.”

Approximately 600 Volunteers of America leaders and care providers from across the United States travelled to Denver for the organization’s 2014 National Conference on June 7-10. In the Denver area, Volunteers of America Colorado Branch serves approximately 5,500 people a year in more than 50 programs in 18 communities statewide. Clients served include homeless veterans, seniors, those with disabilities, people recovering from addiction and low-income families.