Volunteers of America Honors Glen and Kim Campbell, and filmmakers James Keach and Trevor Albert, with 2015 Booth Award in Honor of Alzheimer’s Advocacy 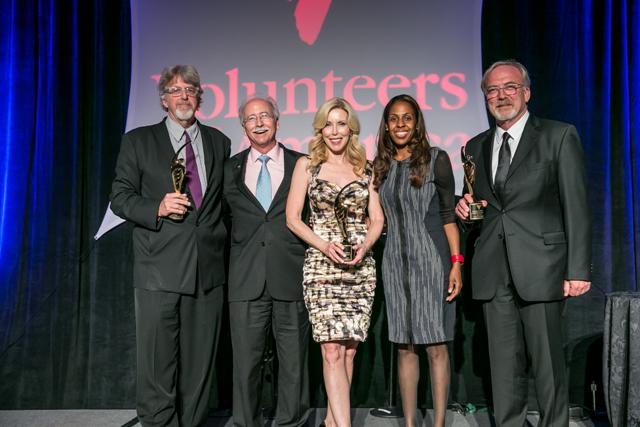 LOS ANGELES (June 30, 2015) – Volunteers of America, one of the nation’s largest and oldest human services charities, awarded its highest honor – the 2015 Ballington and Maud Booth Award – to country music superstar Glen Campbell, his wife Kim Campbell, and filmmakers James Keach and Trevor Albert. This year’s honorees were selected in recognition of their collective efforts to shine a light on the challenges faced by caregivers of those with Alzheimer’s disease. Volunteers of America is an official partner involved in the promotion of “Glen Campbell … I’ll Be Me,” which chronicled the musician’s “Goodbye Tour” across the country as he and his family dealt with the unpredictable nature of his Alzheimer’s disease.

“I am very proud and excited to present the 2015 Booth Award to Glen Campbell in honor of his courage when faced with the dreaded diagnosis of Alzheimer’s, to Kim Campbell for sharing her love, compassion and patience with the world, and to James Keach and Trevor Albert for their incredible, sensitive, moving work as director and producer of ‘I’ll Be Me,’” said Volunteers of America National President and CEO Mike King.

Volunteers of America presents the Booth Award each year to individuals who demonstrate distinguished service to humanity. The award is named after Ballington and Maud Booth, who founded Volunteers of America with a promise to “go wherever we are needed and do whatever comes to hand.” Previous winners include Ambassador Andrew Young, Jane Fonda and Ted Turner, Nancy Reagan and Gen. Eric Shinseki.

American music icon Glen Campbell is best known for hits like “Rhinestone Cowboy,” “Wichita Lineman” and “Gentle on My Mind.” Winner of the Grammy for Lifetime Achievement and member of the Country Music Hall of Fame, he was the first country music star to cross over to the pop charts. Campbell met wife Kim in New York when she was a dancer at Radio City Music Hall, and they were married in 1982. In 2011, he was diagnosed with Alzheimer's disease and Kim Campbell stood by his side as they courageously decided to publicly share his battle with the disease. In 2013, the couple made the move to Nashville, where Kim Campbell now spends time with her husband at his memory support community and raising awareness for Alzheimer's patients and their caregivers.

James Keach, director and producer of “I’ll Be Me,” has been a part of the film industry as an actor, director, writer and producer. He has appeared in more than 50 feature films and has produced and directed theater in Chicago, New York and Los Angeles. His most recent success was “Walk the Line,” for which the Producerʼs Guild of America nominated him Motion Picture Producer of the Year. In 2014, he founded the Volunteers of America I’ll Be Me Alzheimer’s Fund to develop programs to restore the spirit of caregivers, fund research for a cure and raise awareness.

Trevor Albert, producer of “I’ll Be Me,” has been producing films for more than 20 years. After working as a film researcher at Universal Pictures and Warner Brothers, Albert moved quickly up the Hollywood ladder, starting with the classic comedy “Groundhog Day.” He later served as president of Harold Ramis’ company, Ocean Pictures, and went on to create his own production company. He is a distinguished member of the Academy of Motion Picture Arts and Sciences and the Producers Guild of America.

Volunteers of America is a national, nonprofit, faith-based organization dedicated to helping those in need live healthy, safe and productive lives. Since 1896, our ministry of service has supported and empowered America’s most vulnerable groups, including veterans, seniors, people with disabilities, at-risk youth, men and women returning from prison, homeless individuals and families, those recovering from addictions and many others. Through hundreds of human service programs, including housing and health care, Volunteers of America helps more than 2 million people in over 400 communities. Our work touches the mind, body, heart and ultimately the spirit of those we serve, integrating our deep compassion with highly effective programs and services.