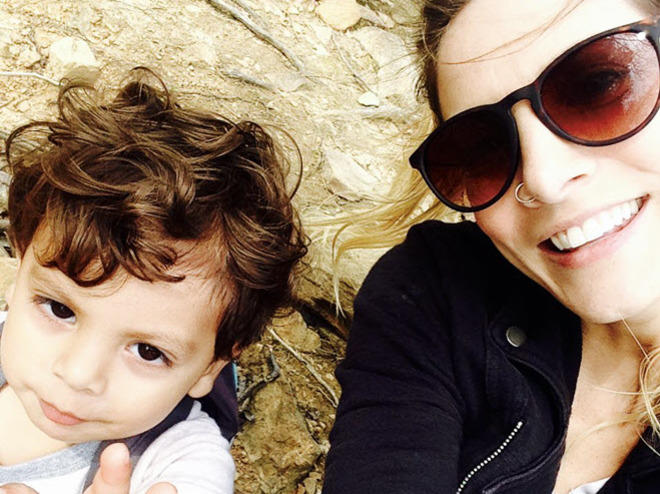 The first time my fiancée attacked me I was pregnant with our son.

He put his hands around my neck and squeezed to the moment before blackout. He smacked my head against a cement wall. He ripped up clothing and stomped on a laptop. He was drunk.

The next morning I felt the welts on my head, tender and pulsing. I touched the bruises on my neck. I knew I had to run. I had to get away. This is the first incident from which all the other incidents will be born, I thought.

A week later we got married.

He convinced me it would never happen again, and I convinced myself I had to believe him. He’d been emotionally manipulative and abusive for years, but, because that’s a sneakier form of abuse, I hadn’t been able to identify and label it. I knew something was wrong. I was becoming angrier. I began screaming when I was upset. I thought I was crazy.

I felt so much shame the morning after the first beating. Suffering the cruelty of words and enduring the psychological control, I felt like a covered pot of macaroni boiling away, the white froth nearing the top threatening to spill out. The violent assault was like taking the lid off—I finally felt release. The physicality allowed the turmoil inside me to reduce to a simmer. I had something to hold onto now. Maybe I wasn’t crazy. There was an odd safety in that knowledge. Almost satisfaction.

My stomach turns when I confront the dark reality: the knots on my head were both painful and a pleasure. The bruises were visual proof of what my heart felt. That was the first frayed edge in the unraveling of what I knew to be right and true. I compromised my fragile and beautiful humanity for a person who neither saw nor cared for my fragility and beauty. I knew it was wrong to stay, but I did.

Nobody ever imagines or fantasizes about being in an abusive relationship. I never thought it was possible for someone like me.

I’d seen movies and heard stories of other women and always thought, how sad for them. I am so much stronger than that. I would never let someone treat me that way. When I suddenly became that woman and allowed a person—my husband—to treat me that way, I felt partially at fault. I must be broken and ugly inside, I thought. I am bringing this on myself. If I could just be happier. Or better at everything.

Slowly, I began to fade. I lost weight. My joints ached. I was ill most days. I didn’t know myself anymore. My mind was a clouded, confusing place. Where I once held convictions and ideals that made me feel confident, I became unsure. The woman I once was and the woman I hoped to become were lost like a pair of cheap sunglasses. They slipped away, and I was left raw and exposed, unrecognizable to myself.

It was my birthday and an argument escalated out of control. This time he wasn’t drunk. But this time I participated. As if a hidden rage was exposed, I slapped back and screamed. One moment I tried to calm us both down, the next I was egging him on. I wanted another a bruise. Of course, what I really wanted was a loving husband and a safe relationship. Instead, a physical marking became a badge I could wear to show my husband what kind of hurt he was causing me. As if a bruise could convey the despair I carried inside.

Over time I learned that if I could “out crazy” him I could sometimes prevent a situation from escalating. If I noticed he was nearing his nuclear detonation button, I would scream or slap first. I knew if I became a cyclone of shrieking and tears it would distract him and force him to quiet me down. It felt disgusting to think and act that way, but I truly thought I was the commander of that manipulation. Of course, I wasn’t. It was just another way he pulled my strings and kept me in an upside-down state of desperation. He was the manipulator. I was helpless.

I was so out of control of my own life that it seemed I had only two choices: quiet victim or emotionally unstable tornado.

Finally, one evening during a routine attack of verbal abuse, I tried to commit suicide. I'm humiliated to admit it. I can barely type these words without backspacing. I would like to delete this from memory. But I cannot. I wanted to die. I also wanted my husband to really know, to understand the unbearable pain he caused me. My son was sleeping in his crib, and I didn’t think about him. I did not consider his life or his needs.

We all develop a list of things we would never do. As we grow and go through life, we decide who we are and what we stand for. Our identities are, in part, described by a code of ethics we write for ourselves. As my personal code was compromised over and over, I felt so far away from myself that death often seemed the only way out. I was wandering in a thick fog, my eyes seeing nothing but bleakness, my lungs breathing nothing but thick guilt and despair.

I will remember the things my son saw and his cries as he clung to my legs. I can sink deep into memories of being so wrapped up in my own torment and panic that I would forget my child was asleep and needed me to be stable and nurturing when he woke. When I try to reconcile the choices I made with the actions or inactions I am guilty of, it leaves me full of shame.

My husband created a fog and locked me in it like a prisoner. But five months after my suicide attempt, while frayed, damaged, and weak, I took my son and left.

What I struggle with now is catching glimpses of my husband’s temper in myself. Was it always there, lurking and waiting for an appropriate trigger? Was it behavior learned as a way to communicate with my partner? Or am I just a single mother who occasionally loses her patience?

I’m not sure, but the answer doesn’t really matter. The truth is that the temper is there and I have to fight against it almost every day. I am determined not repeat the cycle, and I keep trying to be better than yesterday. Sometimes I fail. But I keep trying.

The best prescription I have for healing these wounds is a combination of two things: radical empathy and truth.

I begin by extending an empathetic hand to myself. I remind myself that I am alone now and while not unpleasant, it is difficult. I tell myself that I love myself and that what I am feeling is understandable, but I need to be bigger than my emotions. I must regain the strength and beauty of my soul by rebuilding with each and every moment of choice. And I choose light and love, patience and empathy.

Then I show empathy for my son. By validating and respecting him, I can do my part to see that he grows into a man without a furnace of rage within his heart. He will learn from me what it looks like to make mistakes, to instantly regret them and to soften your heart, apologize, talk about it and repair. He is already utilizing the deep-breathing method I employ when I feel the need to yell welling up.

In my quiet reflections I offer empathy to my ex-husband. Because he could pose a threat to our new and peaceful life, I do not dialogue this with him. Only in my heart do I allow myself to understand him and see him as a small child who was not given patience and guidance. I allow myself to see parts of me in him and to know that we are all products of our story. While that does not release us from responsibility, it does provide an opportunity for empathy. I can love the small child he once was, just like the son I have now. I can love the little girl that I once was and still carry around inside me. With that love and empathy, I can move forward with a little less anger.

Then comes the truth. That is my purpose here. To share my truth in all its unpleasantness, with honesty and bravery, is like a healing balm. We must talk about our ugly places. Shining light in the dark corners of our souls keeps the infectious mold of self-contempt from taking hold.

Angela Arcos is a blogger and freelance writer living in Arkansas.