The True Meaning of Love for Volunteers of America 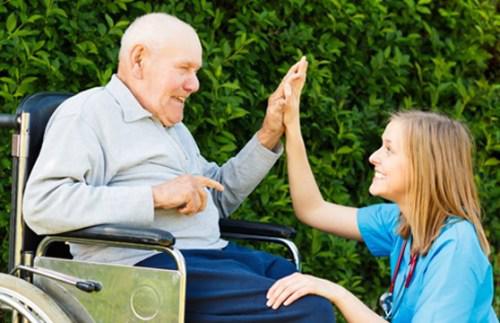 We love to talk about love in our society, especially this time of year around Valentine's Day. Discussions of the trappings of love – the flowers, the dinners, diamond jewelry commercials on TV – seem inescapable. A new trend on social media focuses on increasingly elaborate proposals featuring flash mobs, show choirs and even some national talk show hosts. From the popularity of romantic comedies to the over-the-top – and expensive – weddings favored by many couples, "love" receives a great deal of attention long after Valentine's Day is over.

Unfortunately, these examples focus less on true love and more on romance … which might explain why so many marriages end in divorce. True love persists after the romance and excitement have ended. True love doesn't necessarily come with happiness. It can mean a lot of pain, sadness and sacrifice – experiences that can't be easily summed up in a greeting card or a cute YouTube video.

Over the past year, I've had the great privilege to get to know Kim Campbell, wife of the legendary Glen Campbell. Since Glen's diagnosis with Alzheimer's in 2011, Kim has taken on the never-ending and often thankless role of caretaker for her husband. Her experiences reflect those of countless other caretakers supporting those with Alzheimer's and other dementia-related diseases. These caretakers must express their love despite the fact that the memories and personality of their loved ones gradually slip away. Those with Alzheimer's often can't express their love or gratitude, and sometimes can't even recognize the one taking care of them, but people like Kim carry on because of a bond that transcends superficial romantic gestures. This is the true meaning of love that gets ignored on Valentine's Day.

And this love doesn't just apply to married couples or between parent and children. At Volunteers of America, we employ a small army of caregivers who dedicate their professional lives to caring for others. They do this work out of a deep love and concern for other people, often when they could be doing something more lucrative and less emotionally taxing.