Moral Injury: Easing the Pain of Those Most Affected by Violence 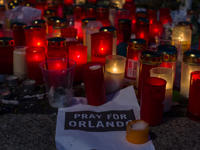 When something horrific occurs like the recent mass shooting in Orlando, we become overwhelmed by the stories of those who were murdered, those who were injured, and the many loved ones left behind to grieve. Their suffering is evident, and the political debates surrounding this horrible act have only just begun. At times like this, we must remember the names and faces of those who lost their lives, as well as support those in our own lives who may be traumatized by what has happened.

Some of the most inspiring stories to emerge from this tragedy are those of patrons inside the nightclub who put themselves in mortal danger to save others, as well as the actions of local police responding to the scene who helped stop the gunman from taking even more lives. But as we focus on the dead and the physically injured, we often fail to recognize the internal pain experienced by those who were spared. We consider survivors to be the "lucky" ones. First responders become elevated as "heroes." These people often need saving too, even though the full extent of their injuries may not be obvious right away.

We know from our work with veterans returning from conflict that mental trauma goes beyond post-traumatic stress. Even after the symptoms of PTS have been addressed, there remains a deeper, hidden pain that lingers – something we call "moral injury." As described in the book Soul Repair: Recovering from Moral Injury after War by Dr. Rita Nakashima Brock, moral injury is described as "When someone violates their core moral beliefs and in evaluating this behavior negatively, they feel they no longer live in a reliable, meaningful world and can no longer be regarded as decent human beings. They may even feel this after what they did was warranted and unavoidable."

While moral injury has most often been applied to veterans recovering from events on the battlefield, it also applies to those who survive tragedies like Orlando. The heroes who saved lives but couldn't save everyone, the survivors who escaped club PULSE but left their friends behind … their lingering pain and guilt will need to be addressed. Volunteers of America is in the process of establishing a new institute focused on better understanding moral injury and finding ways to help people with a variety of different experiences who may suffer in silence.

No matter what one's opinions might be about Islamic extremism, LGBT rights, gun control or any number of other controversial debates the Orlando shooting has ignited, I hope we can all agree that a top priority should be to ease the pain of those most affected by this needless violence … both the victims of physical injuries, and those who injuries may be harder to see. To learn more about Volunteers of America's work in the area of moral injury, please visit https://www.voa.org/videos/volunteers-of-america-national-president-mike-king-discusses-moral-injury-soul-repair.